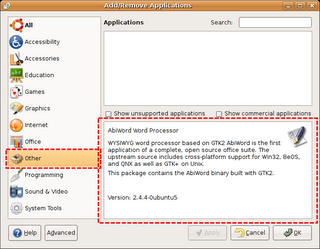 Now testing Ubuntu 6.06 LTS, which was released yesterday, and I'm very satisfied. I was always a RedHat/Fedora kind of guy, but anyway I liked latest Ubuntu a lot.

During the tests I've found a small bug in gnome-app-install, there's no need to say that the gnome-app-install/synaptic combination is much, much better that Fedora's pup/pirut.
The problem is that everytime you select an empty category, the information from the previous package is still displayed because the blank page fails.
Well, as I found this problem I wrote a small patch for the gnome-app-install application that solves it.
I'm filling the bug report right now (filled under BUG #48044).

The patch can be found here: http://dtmilano.googlepages.com/gnome-app-install-blank_page.patch
Posted by Diego Torres Milano at 09:13