We are now applying all the techniques discussed in previous posts to test our android projects.

However, all the projects reviewed were so simple that no one used external libraries so we never faced the problem of using them from our tests.

In this example we are using a dummy external library we have called libdummy-0.0.1-SANPSHOT.jar. In our Activity we are creating an object from one of the library's classes.

When we write the tests and we need to resolve the references to that objects we may feel tempted to include libdummy in test project's external jars, but doing so

we receive the previous error.

The solution is to export the external jar from the main project. Open project Properties and edit Java Build Path to include the external library 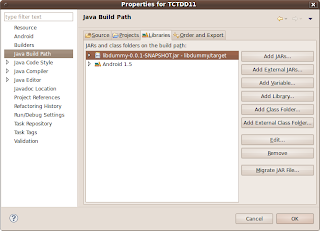 and export it to be contributed to dependent test project 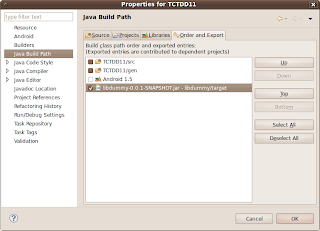 and this will cause no problems running the tests.

Update: Android Compatibility library: Testing Fragments
The aforementioned solution can also be applied to the android-support.jar, the library needed to support Fragments in pre-Honeycomb versions. As before, this should be exported in the main project and used in tests. 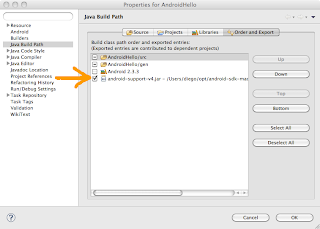 Update: Using ant
Sometimes you may want to use ant to build your projects, for example when you are building using a Continuous Integration server like Hudson, Jenkins, Bamboo, CruiseControl or similar.
To achieve this goal the easiest way is to update the main and test projects using the android update project and android update test-project commands.
The missing step using this approach is the inclusion of the external libraries we used in our previous examples. In the libs directory of the main project include the used libraries. It's preferable to create symbolic links so they are automatically updated if you update the libraries by any mean.
This is how the libs directory will look like:


Having done so, you will be able to create you application using ant debug and run the tests by ant run-tests and the libraries will be automatically included in the test project.
Posted by Diego Torres Milano at 09:49

Thanks! One thing to note is that if you still have a reference in your test project that it needs to be removed.

Thanks a lot for your hints. I could not find the solution easily, as Eclipse only reported 'Test run failed: java.lang.IllegalAccessError' and that's all.

Thanks for your comments. I'm glad to hear that it helped you.

Thank you very much.

You are a lifesaver man.

Thanks for your comments.

I did what you mentioned, but still hitting the same issue. :(

I build with Maven, and my app uses Guava:

My instrumentation tests kept throwing this exception in the <clinit> phase of a class the code under test depended on:

I was able to resolve this by either adding Guava as an <exclusion>, or -- what is probably the correct solution -- by declaring the APK dependency with <scope>provided</scope> instead of the default scope that most Android test examples suggest.

Wow, this is the exact solution that I have been found. Thanks a lot.

+1 thanks for this solution for eclipse, but is there also a solution for building with ant as well?
e.g.
App project, library project and test project all depend on an external jar.
The test project includes the external jar in build.properties with the line jar.libs.dir=... so that it can compile.
Everything builds OK, but when trying to run a test case with adb, then will also then get the IllegalAccessError Class ref in pre-verified class resolved to unexpected implementation.

Thanks all for your comments.
I updated the post to include an example of building android projects with ant and including external libraries that may be used in the tests as well.

Thanks a lot Diego Torres Milano. You helped me a lot.

TimBav, you are my hero of the day. Indeed, your hint to use a dependency with provided solved my NoClassDefFoundError in a maven test project, testing a fragment activity from the compatibility support library.

To be more clear, in case someone else bumps into this:

In the main project, I added the dependency as follows:

I have the same problem as Timbav.
The solution to declare guava dependency as provided works, but you cannot use guava classes in the test project.
Is there a good tutorial to handle this problem with maven?

I haven't tried to use guava in the test project. I will do it and see if there could be any solution or workaround.
As a last resort, remember that building with ant works in these cases.

The test can be run with Eclipse successfully, but it will always failed as above with ant command.
Does anybody know how to solve it?

@Qiao Feng,
I can't reproduce your problem.
For me it's working correctly either from Eclipse or from ant.

You should not have android-support library in your test project's libs directory. Perhaps this is the reason why it's failing.

Just desire to say your article is as astonishing. The clarity on your submit is just great and that i can assume you are an expert in this subject. 온라인카지노

Very good blog! Do you have any suggestions for aspiring writers? I’m planning to start my own site soon but I’m a little lost on everything. 스포츠토토

I really like your writing so so much! percentage we keep in touch more about your post on AOL? I require a specialist in this house to solve my problem. May be that is you! Having a look ahead to peer you. 온라인카지노

This is really helpful post and very informative there is no doubt about it. It’s awesome dude I found this one pretty fascinating and it should go into my collection. 카지노사이트

I am here now and would just like to say thanks for a remarkable post and a all-round enjoyable blog (I also love the theme/design), I don’t have time to look over it all at the minute but I have saved it and also added your RSS feeds, so when I have time I will be back to read much more, Please do keep up the superb job. Checkout my blog Trickscage

Youre so right. Im there with you. Your weblog is definitely worth a read if anyone comes throughout it. Im lucky I did because now Ive received a whole new view of this. 먹튀검증사이트

Excellent Blog! I would like to thank you for the efforts you have made in writing this post.
바카라사이트

Many thanks for the article, I have a lot of spray lining knowledge but always learn something new. Keep up the good work and thank you again. 먹튀사이트