AndroidViewClient/culebra v4.0.0 has been released bringing major improvements and an incredible speed gain by removing the dependency on monkeyrunner and now using python as the interpreter.

I have been thinking about this change for a very long time but never had the time to do it. In one way or another I found workaround after workaround for monkeyrunner and ChimpChat problems. If monkeyrunner was not detecting that the device was not actually connected, AndroidViewClient was forcing a wake() after waitForConnection() returns to verify that everything was right or catching the Exception and showing a more meaningful message (code). If the connection attempt didn't time out and hangs AndroidViewClient was also providing a workaround (code).
Lately, on some Android devices, uiautomator is killed before finishing and the Killed message is also included in the output, and then AndroidViewClient also provided a workaround (code).
I could name several more, but I think you got the idea.

However, it wasn't until the introduction of this bug:


when things were really screaming for a long term solution and not just another workaround.

Then, I took adbclient module I have been developing some time ago to be able to run some stability tests (did I mention ChimpChat was not stable enough to run them?), modify it a bit and now AndroidViewClient/culebra and dump are not  dependant on monkeyrunner or ChimpChat and can use any compatible python interpreter.

The inclusion of adbclient also brought some tremendous speed improvement, something you would thank if you have to run hundreds or thousands of tests.

These charts demonstrates the improvements: 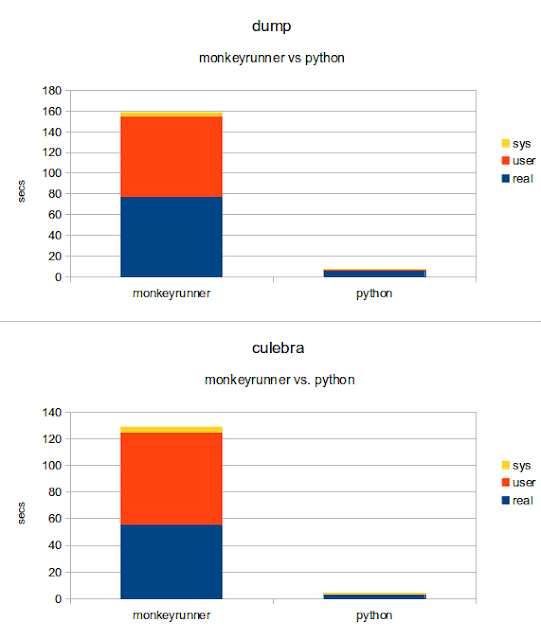 This is just the beginning. Stay tuned and you will see more improvements coming.

Posted by Diego Torres Milano at 20:02