Problems updating Android to 2.3 in Ubuntu

If you were using Ubuntu 9.10 (karmic) because you wanted to avoid some issues with Eclipse and Android ADT plugin that happened on newer versions on Ubuntu, well now is time to upgrade to the latest Ubuntu 10.10 (maverick) if you want to update to the latest Android 2.3 (gingerbread).

You may have discovered this after the update finished using Android SDK and AVD Manager tool and you sadly realize that your Android development environment was turned useless without a single word of warning. Latest Android SDK version depends on GLIBC_2.11 but it's no available for previous versions of Ubuntu, so unless you want to take the risk of using a different repository trying to find an update with unknown consequences to other components, upgrading is your only possible path.
If this is not a serious bug we should reconsider the definition of the word.

The origin of the problem is that Android SDK distribution is not package based and thus no dependencies are considered before updating the software. This is clearly a nonsense. Google has taken a completely different approach with Chrome which is cleverly distributed from a package repository as we can see in this screenshot of Ubuntu Software Center. 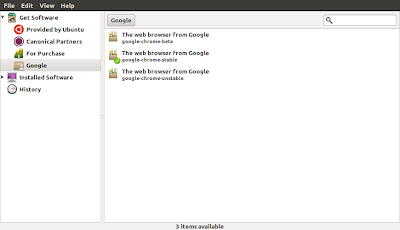 Android SDK must be distributed as packages as Chrome does, otherwise there is no way to prevent this problems happening again and again in the future. We are only scaring people away of Android development with this poor policies. It's true that the requirements page was updated and GLIBC 2.11 is listed now as a requirement, but when you discover it, it's too late. You expect some verifications done from software doing an update that cannot easily be reverted.

This is perhaps the most important bug, but there are others after upgrading to Ubuntu 10.10 (maverick) and Android SDK 2.3 (gingerbread) some other things are still broken, for example hierarchyviewer does not run out of the box and you have to manually copy some libraries,
Android SDK and AVD Manager updates some packages again an again ignoring they are already installed and some deficiencies of the Android ADT Layout editor, to name a few.

I complained about many things about Android in this blog and it seems that in one way or another they were fixed in following releases, so I hopefully think this would be the case.
Posted by Diego Torres Milano at 14:38 2 comments: