monkeyrunner: interacting with the Views

The time may come when you want your tests to interact with the Application Under Test (AUT) in a more clever way than just guessing the View's coordinates on the screen and sending the events.

Furthermore, this is sometimes not possible at all because in order to send the events you may need to obtain some View state. Let me give you an example to illustrate this and if you want you can try to solve it using monkeyrunner.

We can use Development Settings as our AUT and our intention could be to activate the Show running processes and Immediately destroy activities settings.
As we may accustom to do, we can obtain the coordinates of these Views on the screen and send the corresponding touch events using MonkeyDevice.touch() as usual. Sonner or later, maybe sooner, we will discover that because these settings are persistent we should know the state before sending the event, otherwise we will be changing its state other than just enabling this settings as is this example's intention. 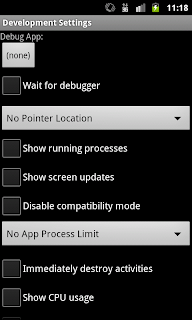 We introduced a way of doing things like that in
Automated Android testing using Sikuli using visual comparison and obtaining properties like the text in EditText's in monkeyrunner: testing views properties (which depends on a patch to chimpchat that has not yet been approved) but now we are craving for a more general approach unless we had the intention to patch chimpchat to support all of the properties in the different Views.

This approach is AndroidViewClient that you can download and install from github. Still has its rough edges but I wanted to show its functionality here and be open to comments.
AndroidViewClient adds to monkeyrunner the ability of
The following script is a case of these abilities in action.