Sometimes you may want to run the instrumentation for a package from monkeyrunner, and the following script does just this. It has the advantage of using the package manager to find the correct instrumentation for the specified package simplifying the parameters you must provide.


You can invoke this script as in the following command line:

We have discussed taking screenshots with monkeyrunner in previous posts, but now we are taking a step further by comparing the screenshots obtained during the test run against some reference image.

Firstly, we need these reference images that you can obtain by running specific cases of the tests specially designed to do it. It's not recommended to use DDMS to take the reference image as in some cases the image format and compression may slightly differ from the ones taken by monkeyrunner leading to false positive identification of the dissimilarity.

As a fairly simple example we will be creating a test to verify the correct drag and drop to a new position of a screen widget  , in this case the Home screen tips. We will be sending touch events to move it from its original position in row 2: 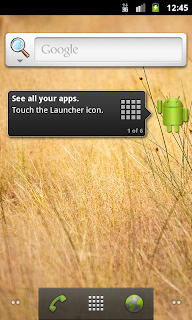 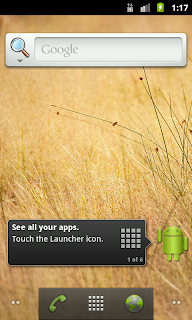 This second image, showing the Home screen tips widget in row 4 will be our reference image or the final state we want to verify in our test.
There are some items we can anticipate will be different, like the time in the status bar, the battery level,  the connectivity, etc. Thus why we expect some degree of flexibility in our test not to fail under these circumstances.
We also use compare from the great ImageMagick package that you should have installed for this script to work.
In Debian/Ubuntu and derivatives
$ sudo apt-get install imagemagick
Having this in mind, our monkeyrunner test would look something like this.
We are using MonkeyImage.loadFromFile() to load the reference image from a file.


This method was not available in monkeyrunner so I implemented it myself and I decided to do it in MonkeyImage, but  it is now included in latest verions of monkeyrunner but as MonkeyRunner.loadImageFromFile().

In case you don't have it in your version you can build it from source (being sure that this patch is included).
monkeyrunner is a SDK component and thus is included in this project that can be downloaded from android SDK source.
Anyway, if you can't do it you may just avoid this step and replace the condition in the if by True.


A brief explanation of the script is:


If you run the script you can verify that the screenshot is taken and the test succeed because they are the same. They only have minor differences in the time and battery level but they lie above the acceptance value.
Now, if we run the test again but this time using (230, 400) instead of (230, 600) in the drag command the widget will be dropped in the third line instead of the fourth and we expect this difference be detected as our reference image for the final state contains the widget in the fourth row, and thus precisely what happens.
This is the comparison image highlighting in red the differences: 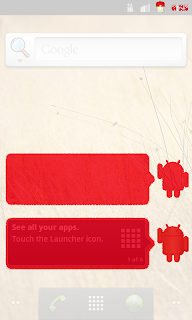 Check that as we mentioned before the battery level and time in the status bar are also detected as differences but they are usually under the threshold.

This is not a real repeatable test as we are not leaving the system in the same state that was found but the idea is to present the subject in the simplest possible way to avoid deviating from the main goal which is demonstrating how you can add visual comparison to your tests using monkeyrunner and ImageMagick.
I'm sure this will give you lots of ideas to implement you own tests.
As always, comments are gladly welcome.