In my previous post, android: obtaining beautiful screenshots automatically, I introduced an automated way of obtaining screenshots of your application perhaps after doing some actions that would take considerably time to do manually over time.

We described how culebra intuitive UI could help you create the automation script even if you don't know anything about programing or python.

However, for simpler cases or when you just want to take one screenshot and an automation script is not worth the effort, dump, another tool in AndroidViewClient's toolbox can be used.

Simply, to take a screenshot and add device art, shadow and glare:

or, with the long option which are easier to remember

Now taking advantage of this opportunity. I would like to introduce some new device art support added in the latest version, like this Samsung Galaxy S4 (this screenshot has been taken with the previous command) 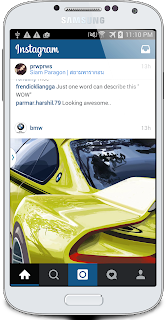 Posted by Diego Torres Milano at 23:41