One of the latest additions to culebra is the concertina mode. Named after the concertina movement occurring in snakes and other legless organisms that consists of gripping or anchoring with portions of the body while pulling/pushing other sections in the direction of movement, this mode allows culebra to move across the UI.

You may have used android's monkey before. monkey is a UI/Application exerciser that generates pseudo-random streams of user events such as clicks, touches, or gestures, as well as a number of system-level events. It is commonly used to stress-test application. While it may serve this purpose, it's overly complicated to be used in other scenarios.


Then, it comes culebra concertina mode that instead of sending pseudo-random events, analyzes the content of the screen and randomly selects a suitable event or action for the also randomly selected target, normally a View.

For example, if the randomly selected view is an EditText, culebra enters some random text. However if the EditText turns to be a password, it sends random passwords, that is instead of just entering a normal sentence it selected sample passwords from a list like the infamous "querty".
Furthermore, if it detects the EditText is expecting an email address, by inspecting the id, the hint or anything else that may suggest that, it sends random email addresses like user@example.com. Of course, other Views, receive other treatment, like Buttons being clicked, Scrollables being scrolled, etc.

Additionally, if the content description suggest the application may be awaiting for you to talk, like 'Tap to Speak' or 'Voice Search', culebra will actually speak random text to the app (this feature is only available on Linux and OSX).

You should check this aspect, it's sometimes hilarious.


Taking advantage of the culebra GUI already described in previous posts, while it's running the randomly selected Views are highlighted. At the same time, the python script is being generated. You can save it, modify it and run the same tests again and again. It's worth to mention that commonly the script eliminates the random selection of components and thus it runs deterministically.

and you can obtain something like this, where the nickname of a new contact was randomly selected from the available Views and the random text "chaos reigned" was entered. 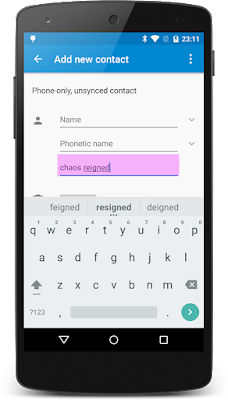 BTW, this screenshot was taken via dump as described in android: obtaining beautiful screenshots automatically.

Posted by Diego Torres Milano at 01:05